So it was farewell to friends at Nana Juana. After taking advantage of some Westerly / Northerly winds we had a good overnight sail across to the Bay Island chain of Honduras.

Utila
Checking in was a piece of cake in East Harbour, Utila and both immigration and the customs officers were so friendly. US$3 each per passport and $20 for the boat. Each cruiser we met paid a different amount & some nothing so it was going in someone’s pocket, but at least not unreasonable. The customs officer noticed that Brett was in pain on his foot and so called the local doctor who came to the customs office. That’s customer service! After an initial inspection we ended up going to his private clinic by Tuk Tuk and before we knew it Brett was getting an injection for an infection moving up his leg from a wound on his toe. Very clean clinic and very professional. Thanks Doc! 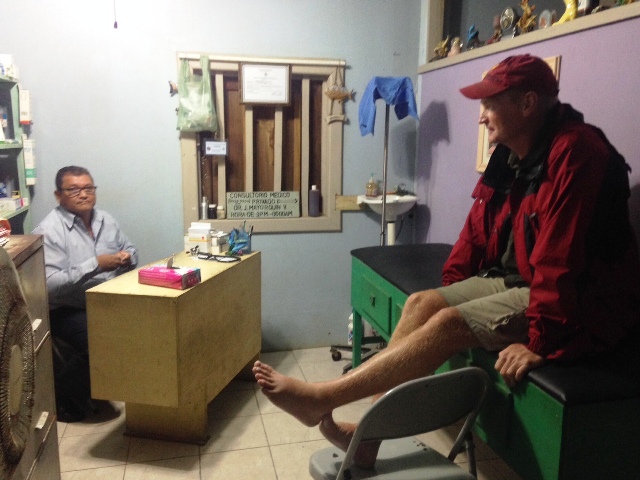 A slightly swollen foot. he must have been in pain as he never likes to go to a doctor…

The Doctor volunteers at a public clinic for the poor till noon and then works at his private clinic from 3pm to 6am. Nice guy. Brett still liked him even after this …..Ouch! 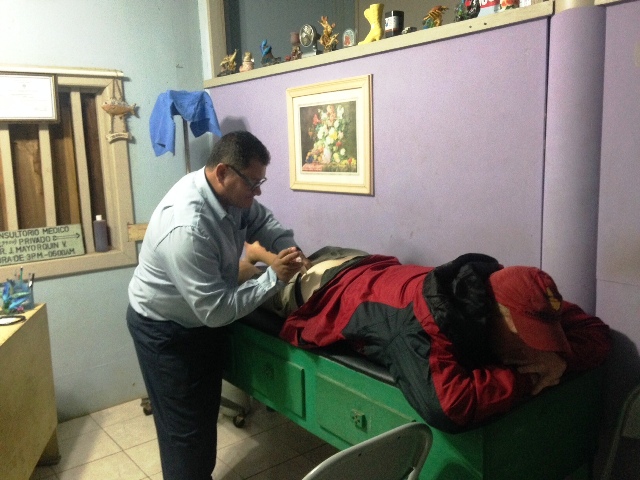 We were back relaxing with beautiful sunsets and a rum in hand, OK maybe for one of us as the other was on medication for a week. Heehee! 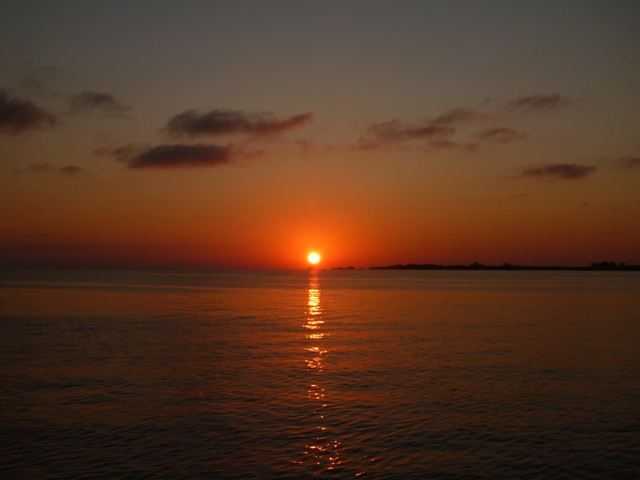 The town of Utila is very small with one main road and Tuk Tuks and motorcycles buzzing up and down. 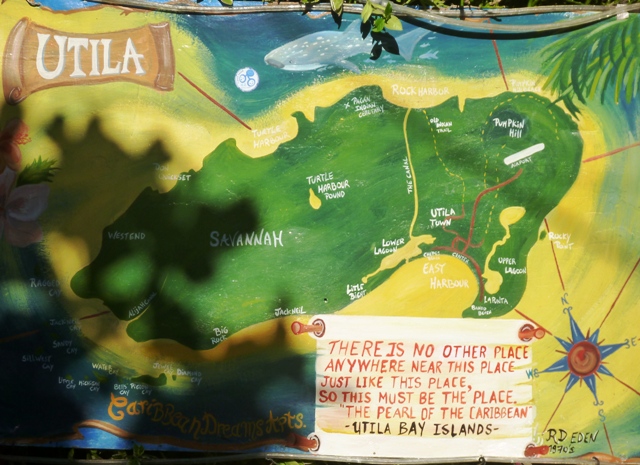 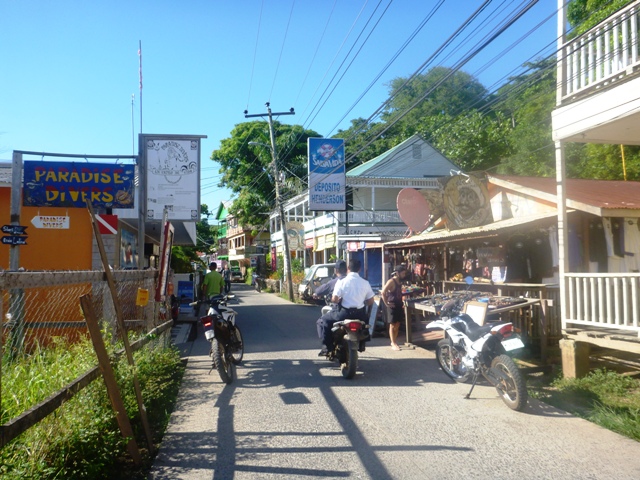 1 main road along the island with little stores, dive outfits and lodging 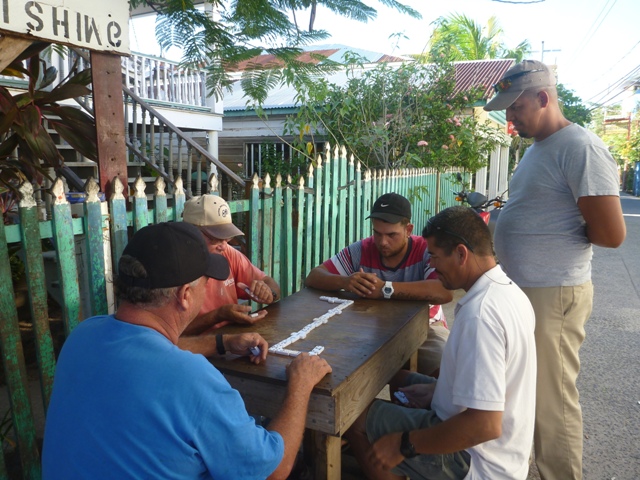 The are a pile of backpackers around town all going diving. Yes diving is the attraction here with something like 91 dive sites around the island. So a diving we must go…..
We decided to dive with a company given it was our first time out in 6 months and chose Utilia Dive Centre, which cost $35/ dive a lot cheaper than Roatan at $50/ dive. There were whale sharks in the area and so in between dives we went in search of them but no luck. Did see a couple of green moray eels swimming, which we have never seen before. 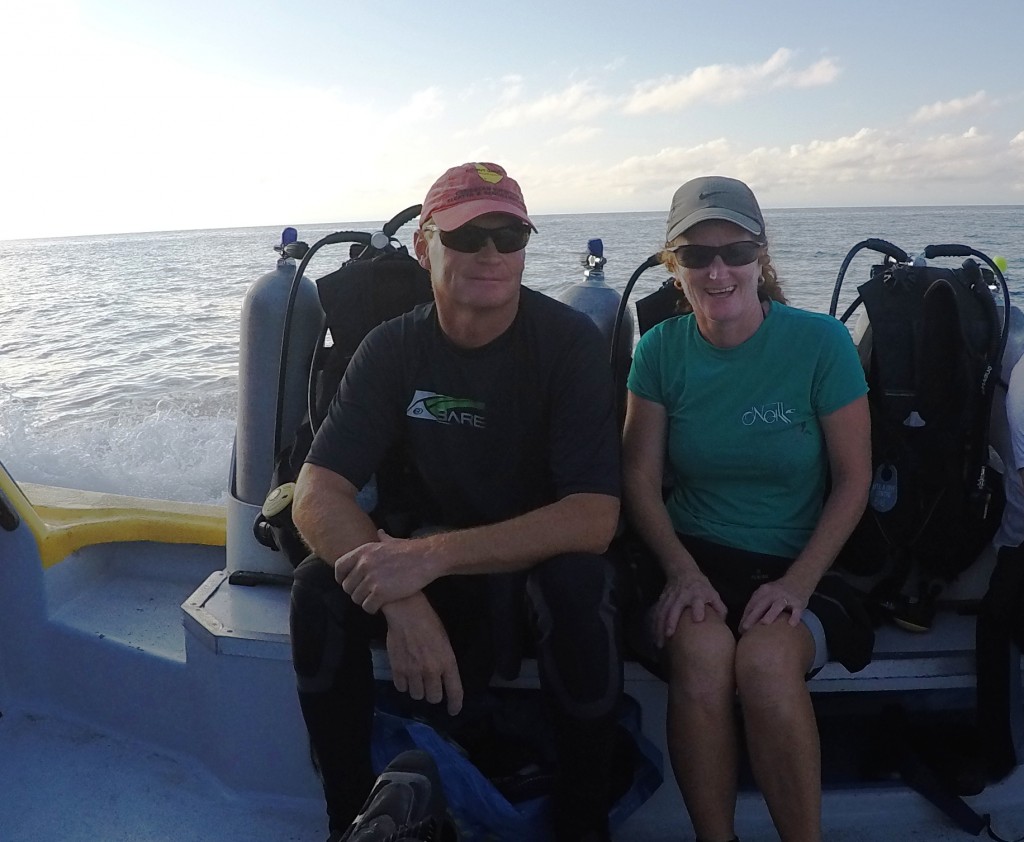 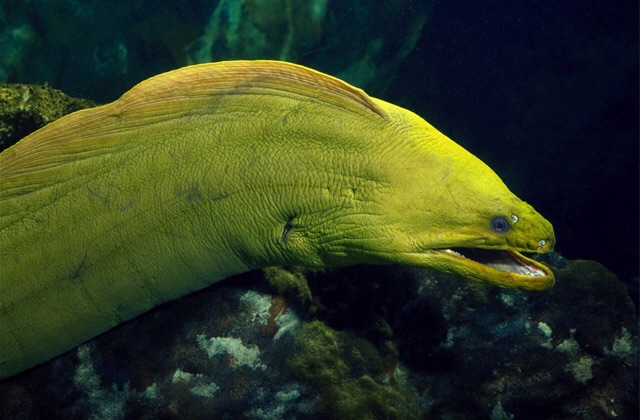 They are fast swimmers and hide in rocks. Very cool to see 2 of them on diff dives.

It’s so nice to be back on the water where we can swim off the back & kayak. The kayaks came out to venture across the bay into Oyster Bay Lagoon and thru a mangrove canal to Rock Harbour on the north side of the island. 6miles each way so the stop at the REHAB bar on the way back was a must for lunch & a cold one. There’s definitely a lot of variety in places to eat all around the island and they are reasonably priced. 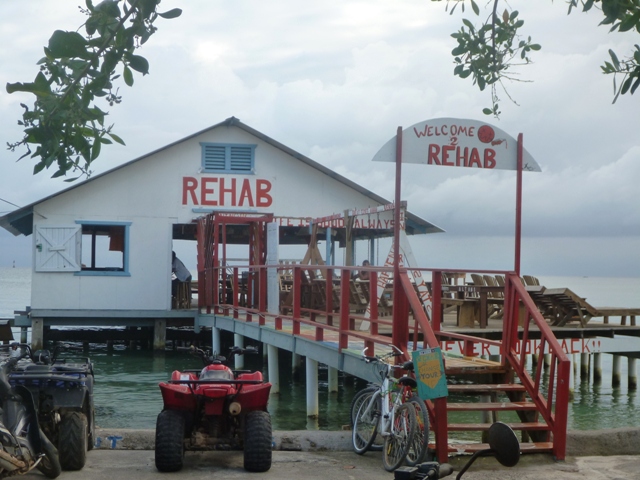 We hired an ATV to tour the island and go in search of Pumpkin Hill which was fun. Brett was in heaven finding the mud puddles from the rain but finishing on the beach looking out to the boats was much nicer. 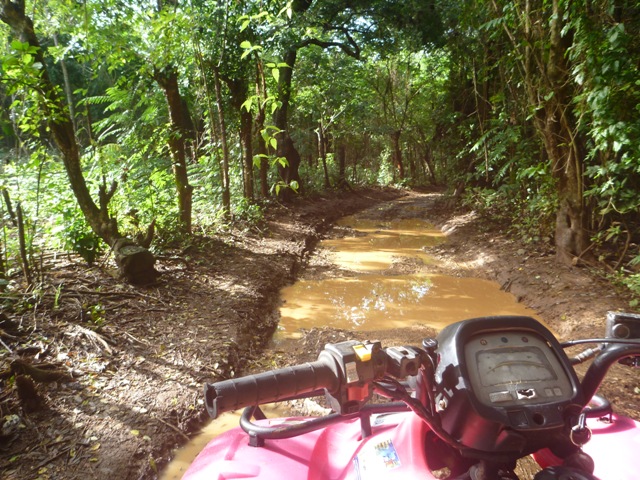 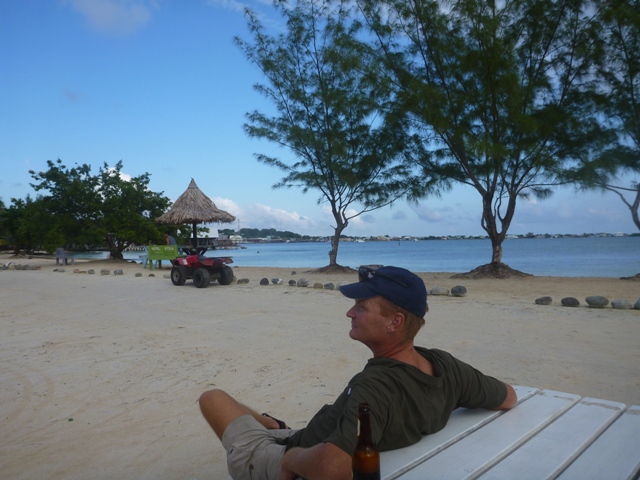 the West end of East Harbour

Utilia definitely had a very cruisy way of life, was affordable with some good places to eat & drink at and where we could definitely relax.

We arrived at West End where mooring balls are placed around the anchorage area. We’d heard they were no longer maintained so tied our own line to the pin, as a friend had run into trouble the previous week.

Snorkeling and diving off the reef at West End was easy as there are dive mooring buoys scattered along the reef edge for you to tie to. To dive we chose a mooring buoy that we noticed all the dive boats going to each day. Great choice as it started at 20ft with lots of coral and led to a shelf that plateaued at 40ft and then went out to the wall which dropped to 60ft and then continued down. 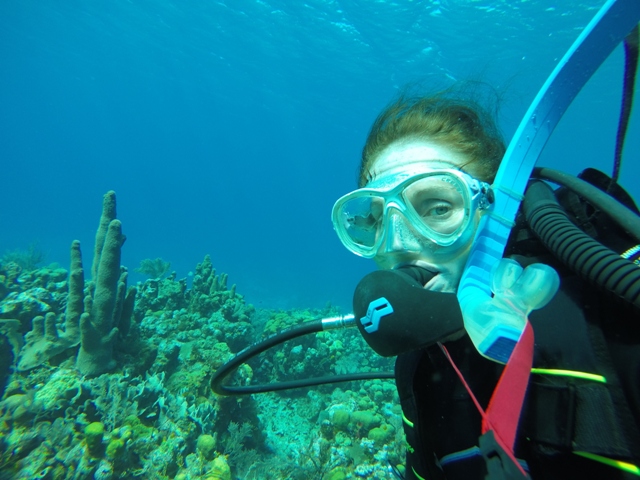 The water was clear with some bright coral and different formations, a few groupers hiding in some of the rock ledges, schools of fish, a porcupine fish that followed us and big lobster that looked at you and said you can’t have me I’m in a marine park. The Hawksbill turtle that calmly ate the coral and didn’t care we were there was a real treat. Good diving.

The town at West End is quite touristy with lots of bars/restaurants, dive shops and little stores to wander through. After kayaking down to West Bay where all the tourists from the cruise ships are lounging in deck chairs around the many resorts on the beachfront we headed back to West End had Jerk Chicken (yum) and found a cool Canadian bar called Sundowners and enjoyed the views out to the bay. 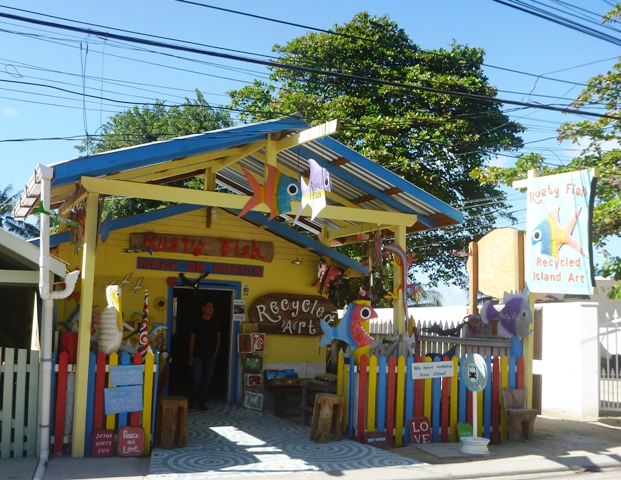 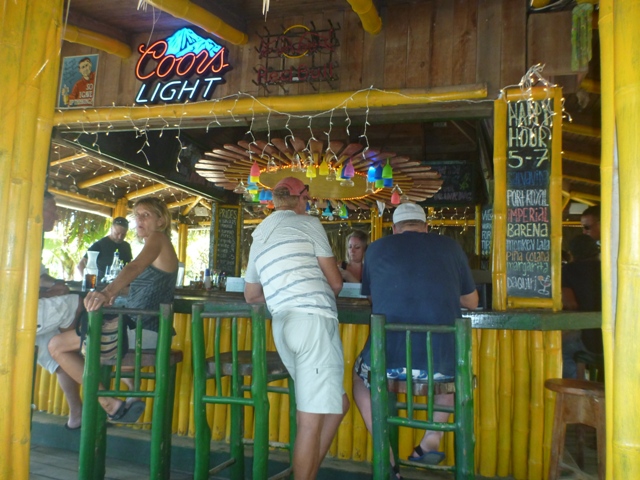 When a strong Nor-Westerly wind is forecast its best to move out of the West End anchorage as there’s no protection. While in Roatan we visited the West End twice and yes had to move to French Cay on the southern side of the island, which provides better protection for a front.

French Cay has a nice big anchorage and 2 marinas; Fantasy Island with Aussie Pete the dockmaster and Brooksey Point, which Mike owns and operates. Both welcome cruisers and have different events going on. We anchored off Little French Cay at the LEK Zoo where we could hear the local lion roaring regularly. Quite strange. Most days they transported the horses to the island for the cruise ship guests. 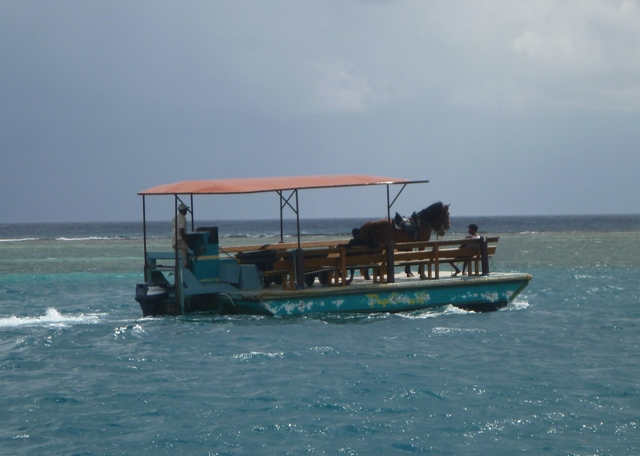 The town of French Harbor had lots of shopping opportunities with a great big supermarket which had lots of American food for provisioning, hardware stores and a variety of marine chandleries. Brett’s favorite tool on the boat finally wouldn’t start as it was so rusted so off we went to ACE hardware down the road in search of a new vacuum. 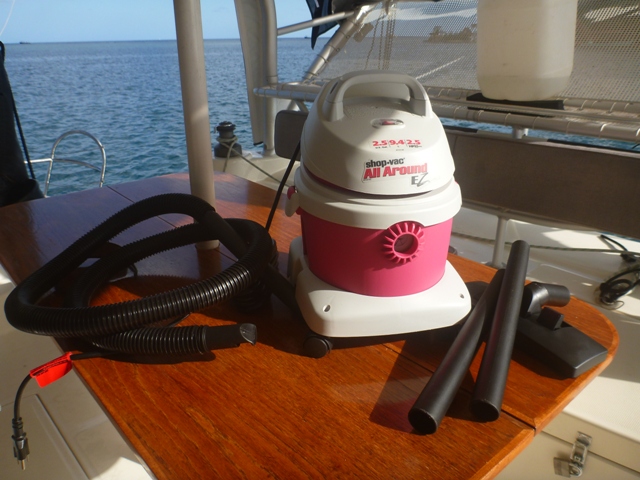 A pink one was the only small powerful one they had!

French Cay, Roatan is somewhere most cruisers pass through. It was funny looking around the anchorage one day and recognizing 8 boats from Nana Juana. They just kept arriving but as usual it was nice to see familiar faces. Some of us ended up going on an island tour with Mike from Brooksey Point Marina. 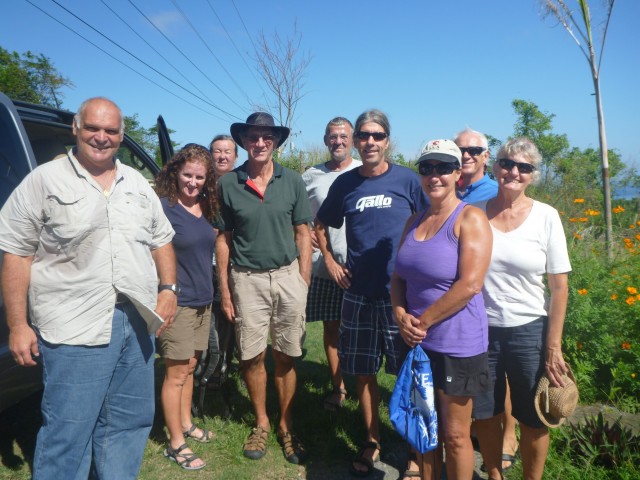 Mike & the Nana Juana group, thanks to April

We drove along the spine of the island with views out to the reefs on the side and down to Oak Ridge, where small basic wooden homes were perched out over the water on wobbly pilings. Punta Gorda was a small village where the Garifuna people live. We watched the kids out playing on the water with a fridge and draws as their canoe. At the West End of the island was West beach with all the bars, restaurants and dive stores for the tourists. Quite a contrast. 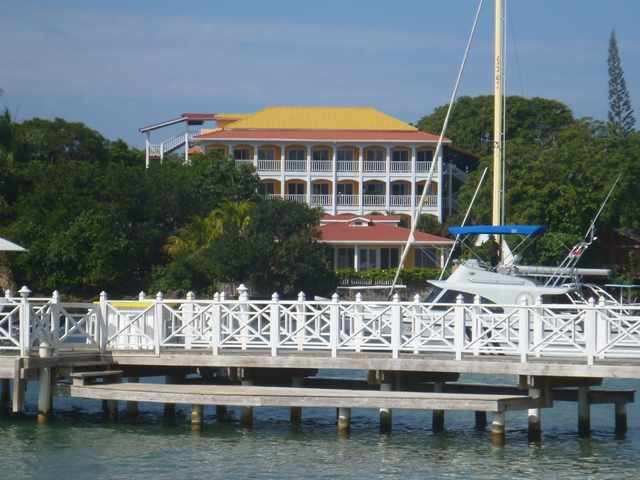 scattered thruout the island were these brightly colored homes, this is at West End 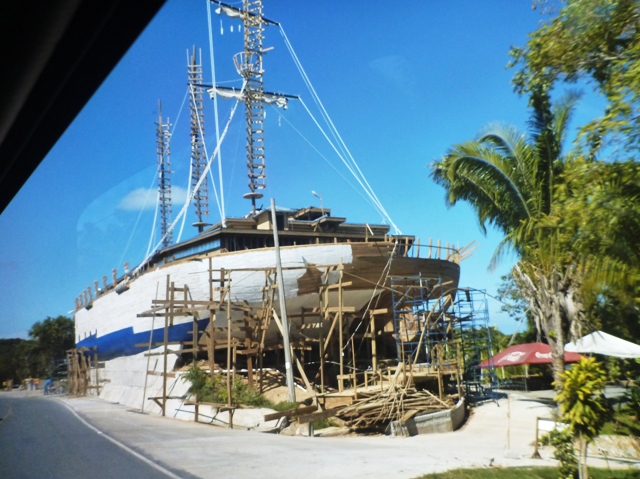 a new disco being built on the spine with 360 views, not to sure if this will be a success 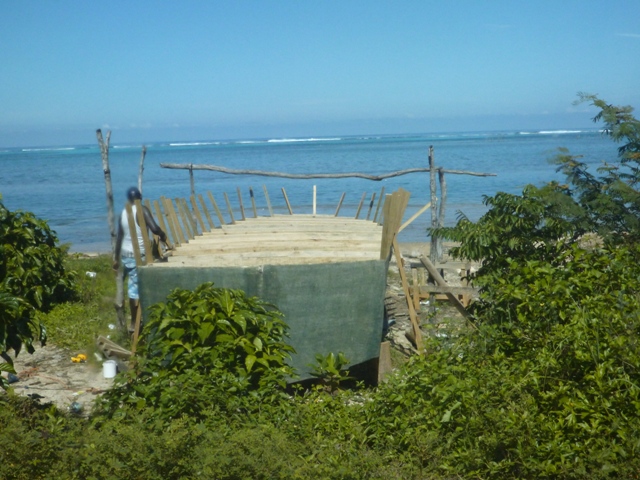 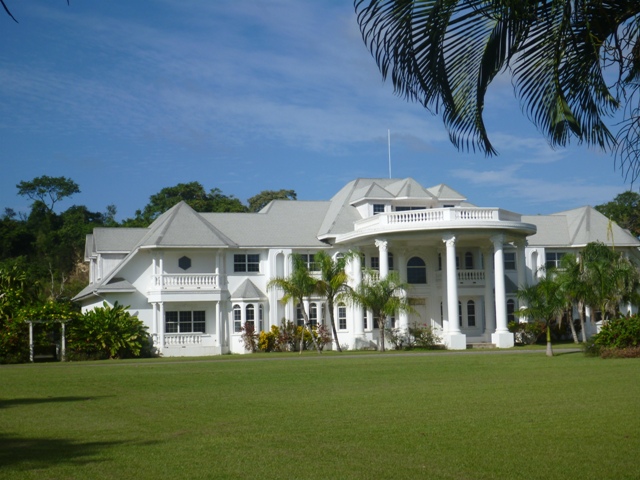 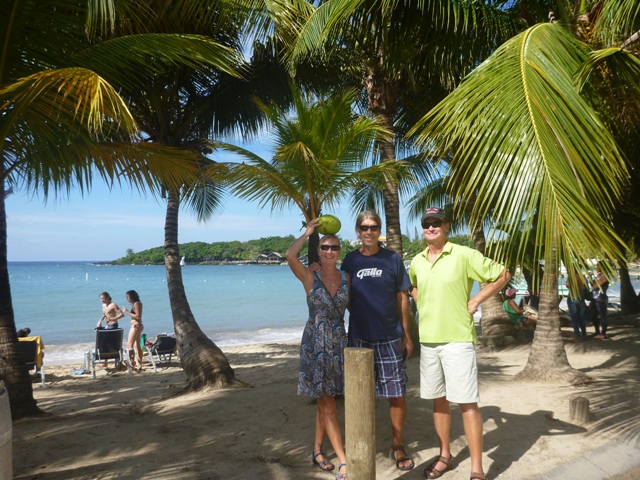 Aussie Pete at Fantasy Island has events most days to draw cruisers in to his palapa and appreciates everyone stopping for a drink at the end of the day and so of course we had to go in to hassle the Aussie about losing the World Cup rugby.
We had missed Cain’s Big birthday celebration in the Rio Dulce so had April & Cain over for fresh snapper, champers and wine. Yummy, fresh fish again. These guys are going south and we are going north but no doubt we will see them in a few months when we get down to Panama too. 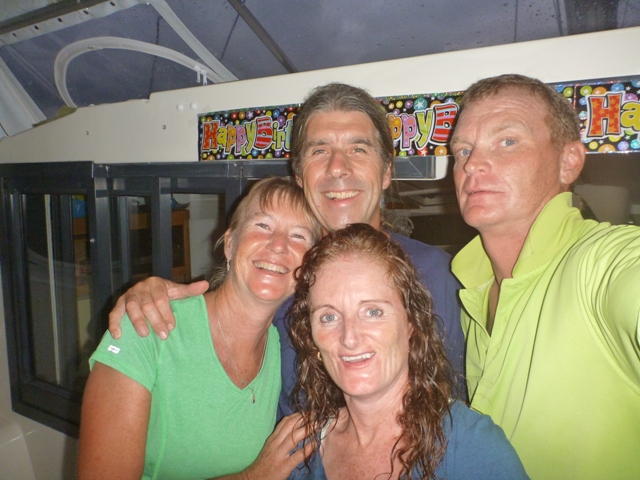 Off into the sunset

We’ve been watching the winds to head East and then North. We decided to take advantage of the end of a northerly and was surprised when we turned up at the Port Captains office to get our zarpe (Permit to remove the boat from 1 country and enter another) to hear he wasn’t giving out zarpes today. What? We are a sail boat we need some wind to go East and a northerly helps. He thought 5-8 knots of wind the next day was better for us. Ah no that’s not sailing that a motor boat and we can sail faster than our engines will take us.  We’d already checked out with Immigration so passports were done. We sat in his office for an hour reviewing weather charts and talking about sail boats. He then said come back in 2 hours after lunch and pay the Zarpe fee and I’ll give it to you. Anyway US$3 later and we are sailing out of the French Cay bay with the sun setting and it’s great sailing weather for us as its on our beam, seas are flat at the mo and we have 11-15knots. She likes flat water this boat. May be different further out but hey we have to go East to go North.