Had been waiting for a weather window and after 2 weeks finally got one. While we waited in Ile des Pins we enjoyed good weather and the company of other cruisers…. 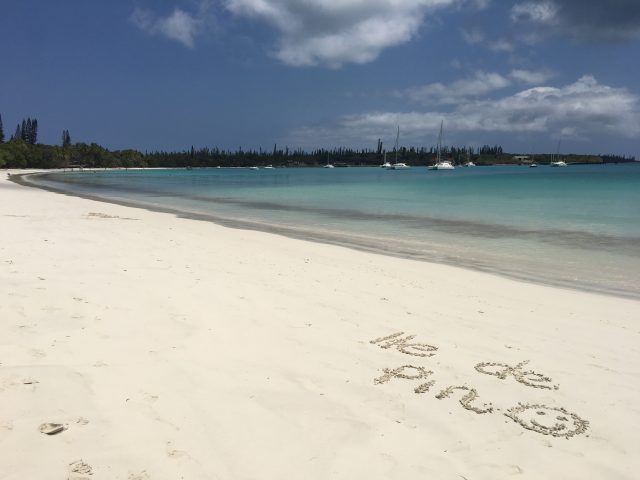 A protected bay with powder soft sand and crystal clear water. Do I have to leave? 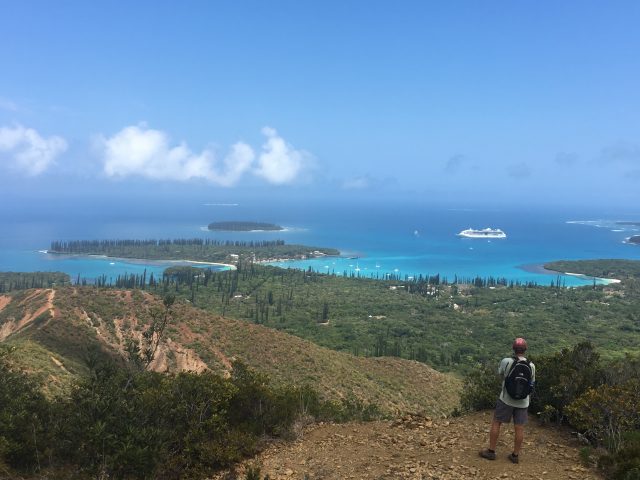 Can you guess where we have decided to go for cyclone season? 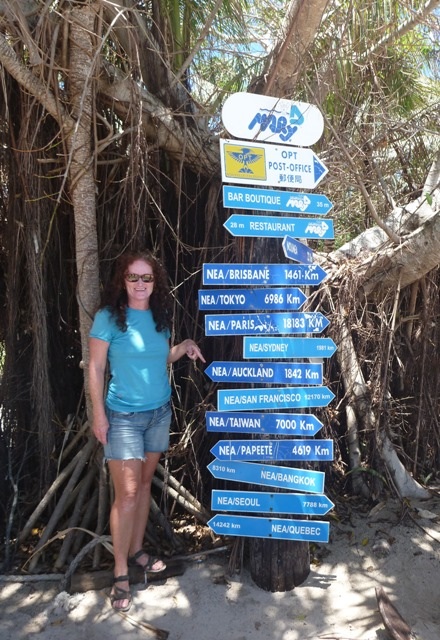 On our trip south we had lively seas as we were tight to the wind the whole way. Did not stop us fishing and caught a couple of tuna to replenish our freezer supplies. 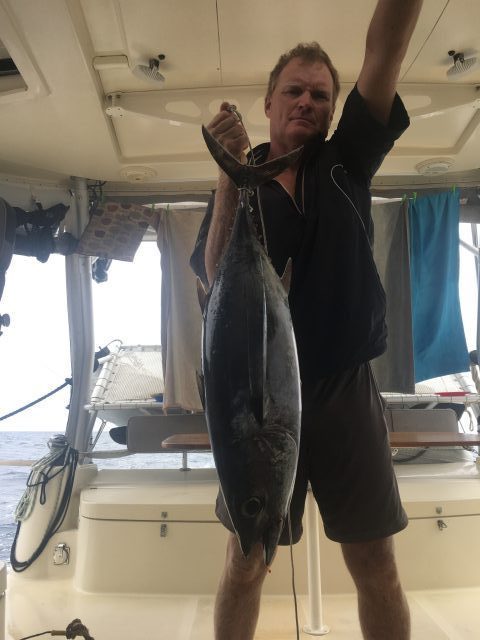 We arrived into Opua in the Bay of a Islands on Saturday 25 November, 2017 seeing lots of familiar faces at the Opua cruising club. A party with music and fancy dress was a great welcome into NZ. Time to rest and recover from our passage.

Wahhooo! We made it to Nuku Hiva in the Marquesas, 2,981 nautical miles as the crow flies or 24 days and trust us there’s a lot of ocean between the Galapagos and the Marquesas. 🍾🎉 Had a few days where we could go wing on wing with our sails because our course was directly downwind. 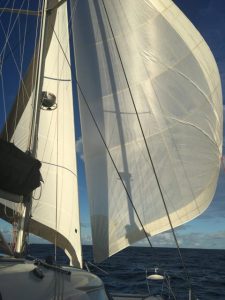 What did we do: read lots of books, podcasts, card games, binge watched the “Breaking Bad” TV series, exercise (putting sails up & down with the squalls and wind changes), fishing, pondering life, gazing around at ocean and the night stars, food of course and lots of sleep to make up for our night shifts. 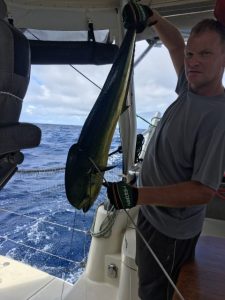 Sightings:
– 1 manta ray with a 15ft beam that swam under the front of our boat, huge!
– 1 whale sleeping on the surface who then showed us his tail and dived
– lots of pods of dolphins
– these small brown birds with a white bum miles from anywhere
– 1 fishing boat within 1 nautical mile of us going the wrong way into some big seas

The weather was on the whole good with squalls typically coming thru after midnight thru into the early mornings. We had to go south of the rhumb line to find wind and it was tight on the wind to get to the SE trades, which when they were there helped us cruise right along. We had wind from every direction including some days with NOTHING! Damn, wasn’t this meant to be a fast downhill ride, ah not this time of year … Oh well we made it, safe & sound with no damages. 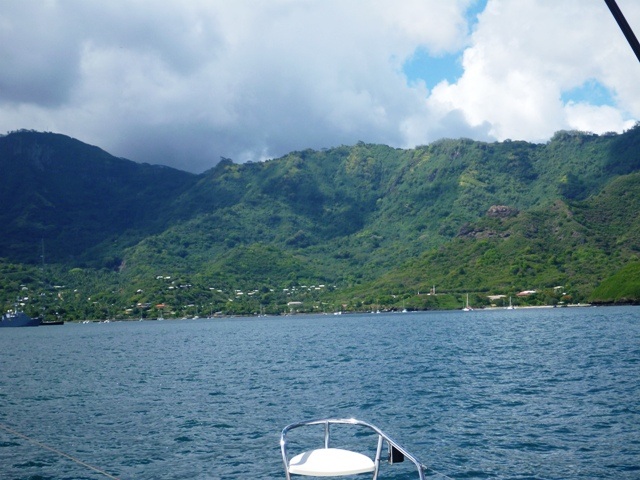 Well I made it back to the Rio Dulce, Guatemala after two and a half months, 9300 sailing miles, four airplane rides and a six hour bus trip. I’m back home on Seismic Wave and Teresa has made me write my first and probably last blog entry! Teresa took great care of the boat while I was away and organized lots of things to help get the boat ready for the next couple of sailing seasons. I thought she was trying to take over as chief engineer but she has assured me no she doesn’t want any of that again. 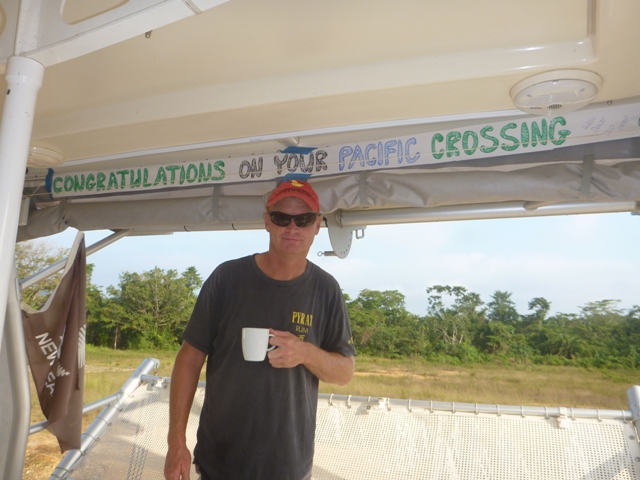 Blue Dream was a 50ft Benateau Monohull. For the leg from Rio Dulce through the Panama Canal we had a crew of four (Bill, Brett, Richard and Johno), 3 catamaran owners and for the canal transit we were joined by Chris from the yacht Exit Strategy. Why so many well the canal authority requires a captain plus four line handlers on each yacht transiting the canal. 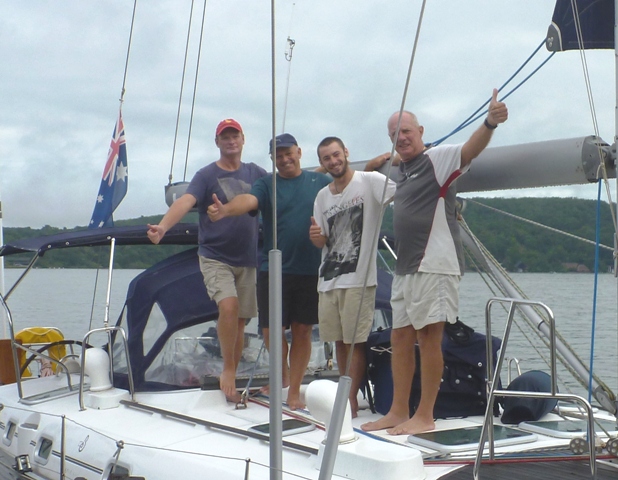 Blue Dream had been in storage for about 4 months so the first week on the water heading south to Panama was spent repairing numerous items to prepare the boat to be ready to cross the Pacific Ocean. All of the crew were more used to our own Catamarans than the longer but sorry less comfortable monohull rocking and rolling over waves. I don’t think any of us will be trading to a monohull soon. 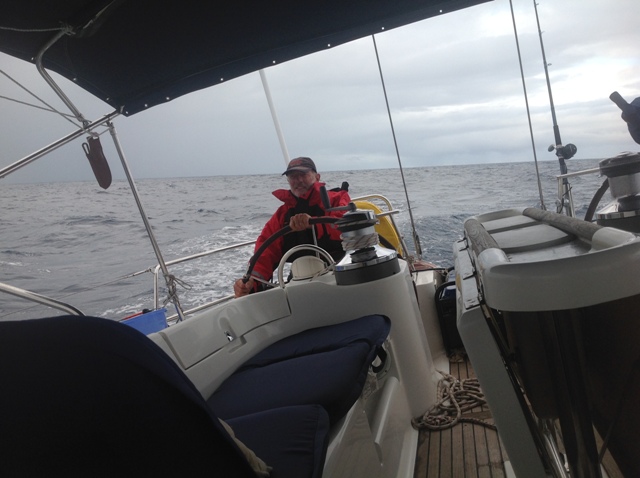 On the trip to the Caribbean side of Panama the agent that was arranging the Canal transit contacted us with a date the Canal Authority would measure the boat. The date gave us a few days to kill before we needed to be in Panama so we stopped for 3 nights at the Colombian tourist island of San Andreas. This was much preferred to spending extra days waiting at Shelter Bay in Panama as Shelter Bay is not located close to any facilities or beaches. I’m sure there is a good story on how Columbia came to possess islands that are closer to Nicaragua, Costa Rica and Panama than to mainland Columbia. We enjoyed the stop over and then sailed a couple more days to the Caribbean end of the Canal. 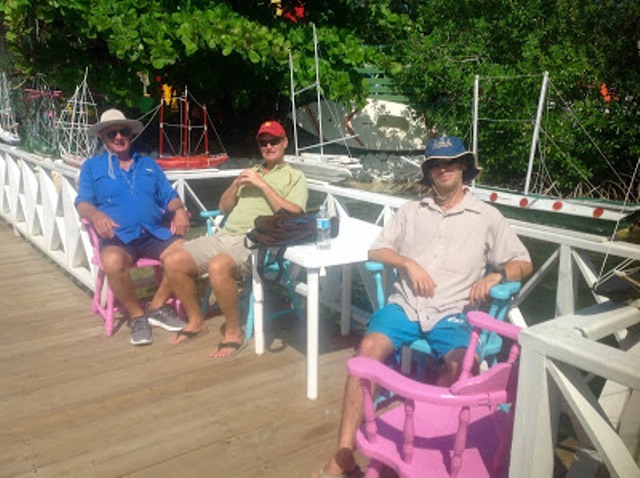 San Andreas was great for provisioning and hitting the local bars

Once the Canal confirmed a transit time we took the vessel out to the anchorage to meet the Advisor who is provided to coach each small vessel through the canal. Slow vessels like sailboats are required to transit over 2 days. The first day didn’t really start until almost dark when we entered the 1st of the 3 locks to lift us to the level of Gatun Lake. It’s pretty neat to watch the water fill around the boat and lift it and the huge cargo ship in the lock with us. Once the 3 locks were transited we motored about 5 miles to a mooring station to overnight. A pilot boat picks up the Canal Advisor and brings back another first thing in the morning. The 2nd day started with a 4 hour motor through Gatun Lake and some narrow cuts of the hundred year old canal to the 3 down locks. On the way down yachts enter the locks in front of the cargo ships then the behemoths get pulled up to the stern of the yachts. 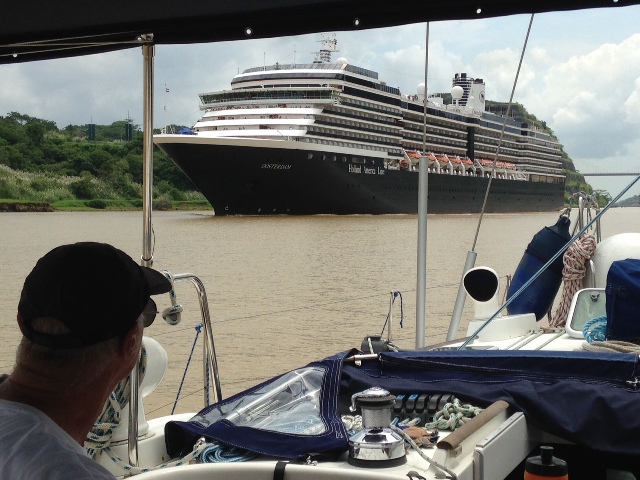 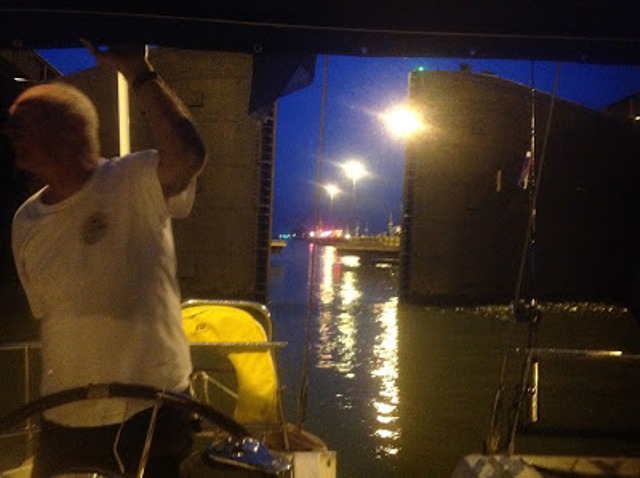 Lock closing behind us

Once the down locks were completed there is an hour or so of motoring to the Balboa area of Panama City on the Pacific Ocean side of the Canal. A pilot boat picks up the Advisor and a small launch picks up the long lines and extra fenders provided by the agent for use in the locks taking the crew to land that weren’t continuing. Bill and I did a quick stop at a floating fuel dock for some diesel and headed out to the Pacific before dark. Almost there, only a couple of months and 8400 miles left! 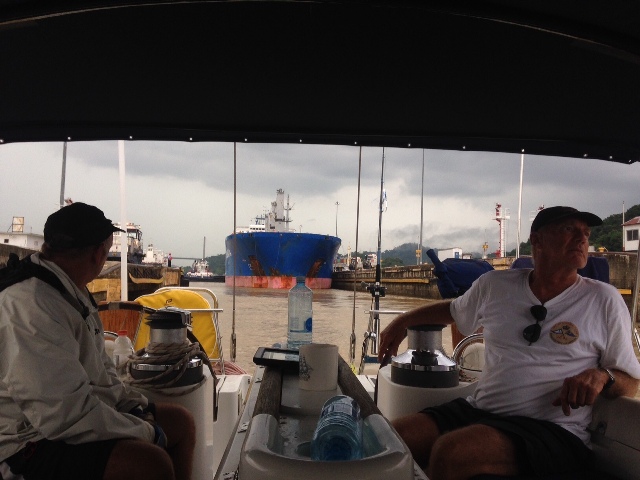 Hanging out in one of the locks 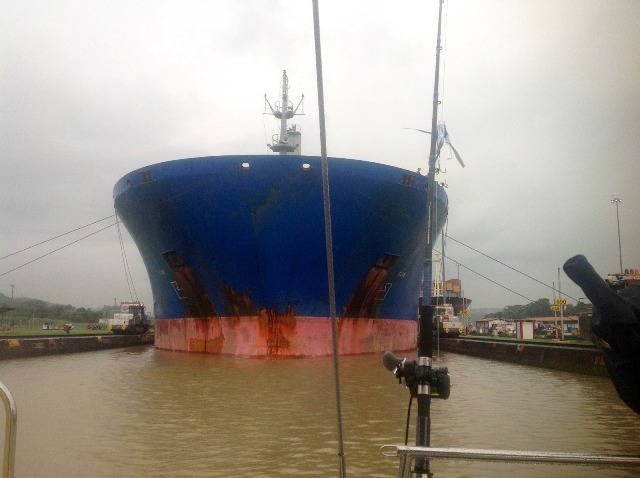 And then suddenly it was nearly on top of us.

The first week out of Panama was hard onto the wind and a current on the nose and I’m sure Teresa was glad she didn’t come. Progress was slower than we would have preferred and sailed and motor sailed as conditions allowed. Not the smooth downwind holiday I was promised! Our goal was to go non-stop to Cairns, if possible, so we had to sail the majority of the time not motor. This issue was solved on the fourth day out of Panama when the engine starter had a complete meltdown/dead short. I tore the starter apart but it was a write-off with the varnish melted off the windings and all insulation missing from the internal and external starter wires. As we didn’t have a spare starter Blue Dream was officially a sailboat until we could source and install a new starter motor. Battery charging would now be handled by a small gasoline powered auxiliary generator as the boat doesn’t have any solar panels (note to everyone a good solar charging system is a must on any cruising boat in the tropics). Good thing in Panama we had decided to bring 100 liters of gasoline along with the extra jugs of diesel fuel. 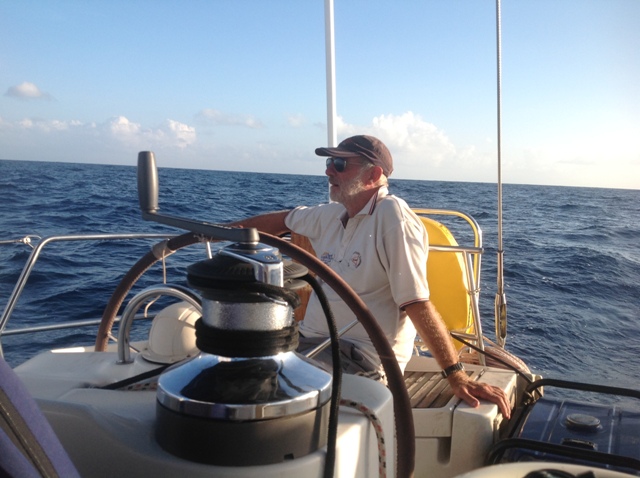 Nothing but time now to contemplate life’s next adventure

A few days after the starter motor failed we had made our way southwest enough that the wind had started to back us and a couple of days later the current was with us also. Now the routine can start as the boat is slightly flatter with the wind from behind but the swells still push the rear of the boat around enough to dump the air from the foresail every once and a while. When the wind was right we ran with the asymmetrical spinnaker. Usually only during the day but we did run it on a couple of clear nights also. 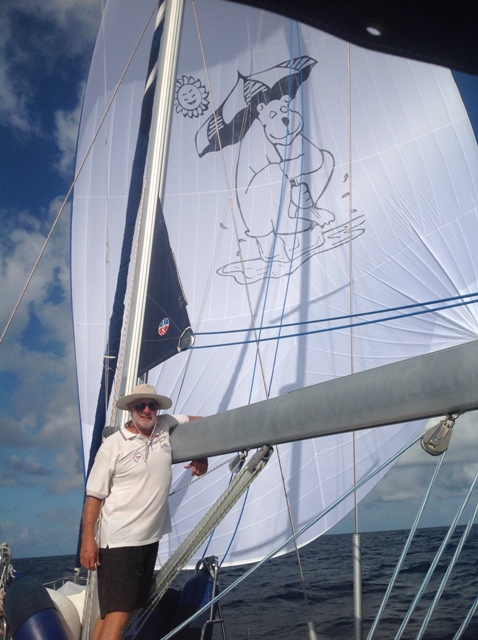 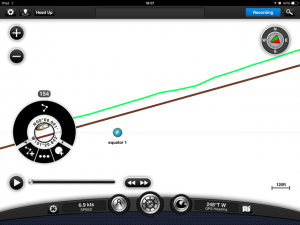 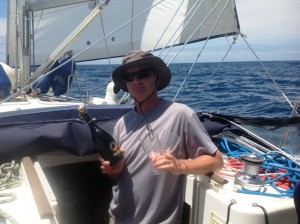 Toasting King Neptune at the Equator

Through email and texting from our satellite phones we had arranged for a new starter to be delivered to Nuku Hiva in the Maqueses Islands of French Polynesia and 25 days & 4000 miles after leaving Panama we made an overnight stop at Nuku Hiva, sailing into the anchorage. 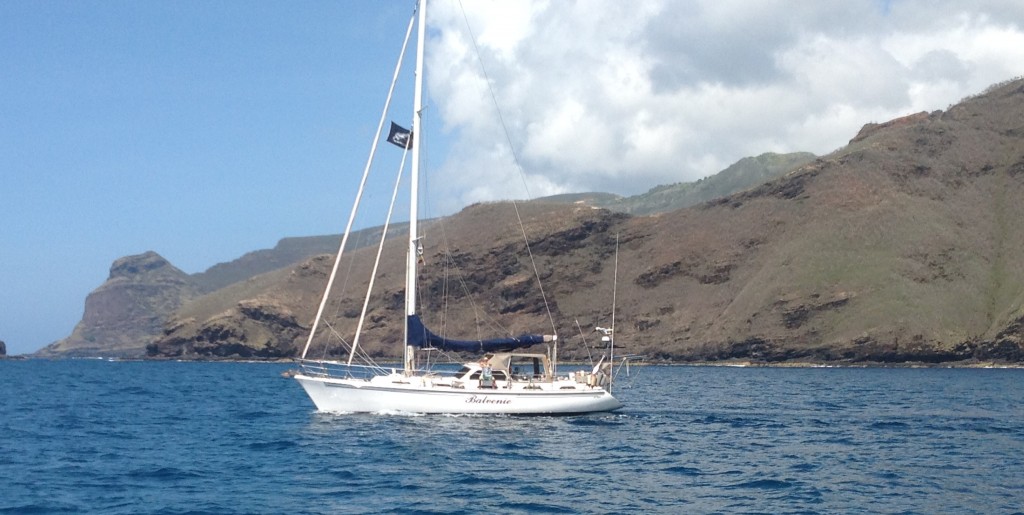 The starter was delivered to us and half an hour later the engine was purring again. Still don’t know what caused the starter to meltdown as the engine was running at the time it smoked itself. Anyway we were ready to hit the road again but a group of Aussies and Kiwis had other plans. Mark and Amanda from Balvenie along with Roger and Sasha from Ednabel cooked us a great dinner along with a couple of nice take-away meals for the road. So we enjoyed the evening with them and a hoard from the boat “Alabama”. Once all the rum and wine was gone everyone returned to their boats and we had 8 hours of sleep with no watch duties. Bliss! After a couple of up mast repairs in the morning we set off again. When Bill was up the mast he discovered the forestay had a couple of parted strands. We would have to limit the use of the foresail to reduce pressure on the forestay for the second half of the trip so we decided to aim to American Samoa for a fuel and water stop, as there was no water maker onboard. 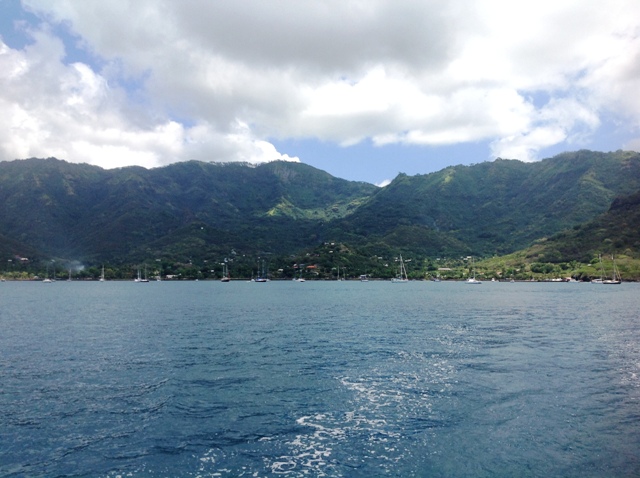 Nuku Hiva had quite a few boats anchored for cyclone season

The rest of the trip was pretty routine other than a couple of days skirting the edge of a low pressure system just north of Fiji. This low ended up becoming cyclone Tuni. But we squeezed though with less than 4m waves and 35knot winds, all from behind so it made for a good sail for us. 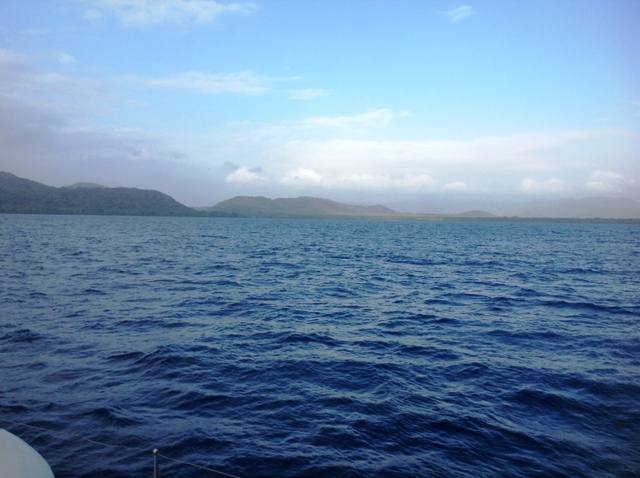 Veneuatu where Bill finally completed his circumnavigation 39yrs in the making

So what did we do for 54 sailing days you may ask. Really ocean sailing seems to be a test of keeping your mind busy day after day especially when you are out there for 50 odd days. 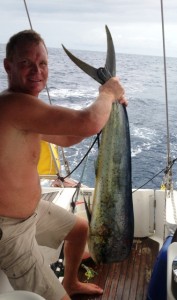 Fishing was our favorite thing of course. We caught 5 fish on the Pacific side that we landed and numerous huge ones that stole all the lures and lines by the end of the trip. The sailfish that jumped into the air and took off with the lure and stripped the line was the best. We read all the paper books and magazines that we found on the boat, cooking was a chore as food didn’t always make it to the stove or stay on your plates what with the rock and roll of a monohull. We worked out it was better to eat out of a bowl in our laps. At night we did 2 – 3 hour night watches and found that the Pacific is a big empty place. We saw a dead floating whale, 1 freighter and 2 fishing vessels until we neared the shipping lanes into Australia.

Shaved again and a smile on the Captains face as we get closer to Cairns. 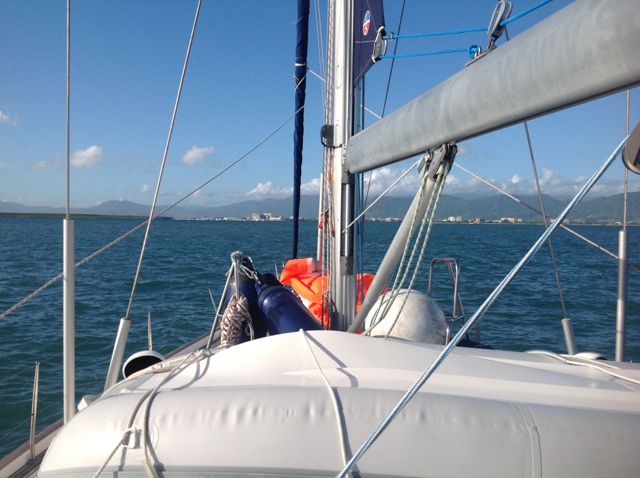 Cairns our final destination in sight

Jan, Stoney’s wife was happy to have Blue dream back in Australia and after 2 hours with customs and immigration on arrival, she took us out for huge juicy steaks. With no freezer on board we hadn’t had red meat in 2 months so as you can imagine was appreciated.

Good trip with Bill. Next time I do the Pacific there will definitely be a lot more stops along the way though. Lots and of islands to see. 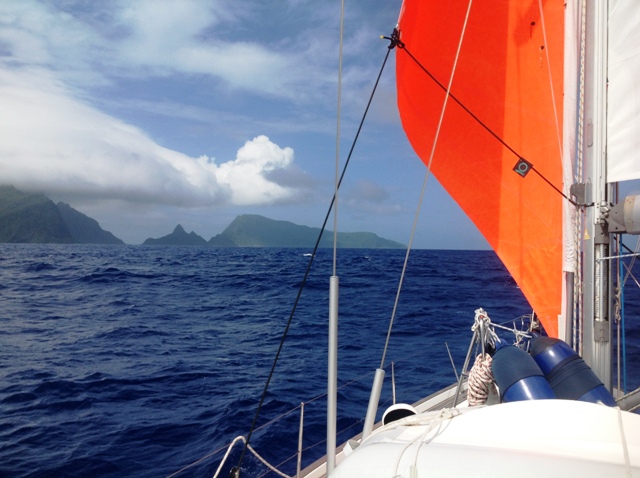 Passing an island chain in Samoa.